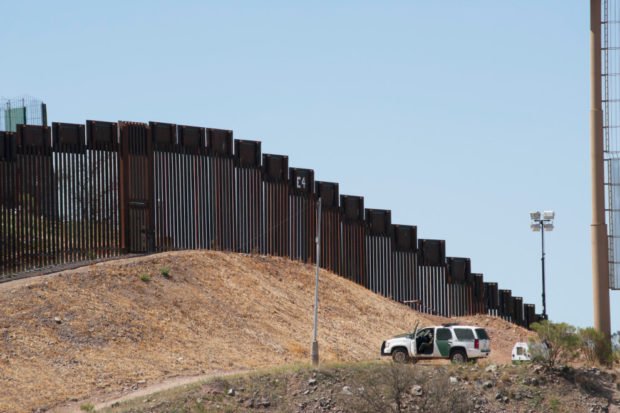 YUMA, Arizona — Top officials within the Department of Homeland Security (DHS) visited southern Arizona on Friday to commemorate the completion of 100 miles of new border wall.

Chad Wolf, the acting secretary of DHS, stopped by the U.S.-Mexico border near Yuma on Friday, delivering a speech in recognition of the important milestone: 100 miles of completed border wall since the beginning of the Trump administration. Wolf was joined by Arizona GOP Sen. Martha McSally, Yuma Mayor Douglas Nicholls, and numerous Border Patrol officials.

The acting secretary looked on as a special plaque, emblazoned with President Donald Trump’s name, was welded onto a section of the wall.

“Today, as a milestone has been reached, a celebration is in order. Today I am proud to report that the Trump administration has now constructed 100 miles of new border wall system on the southern border,” Wolf said. “This is a milestone achievement for the president, the Department, and more importantly for our country.”

In plain sight behind the acting secretary was newly-built border wall, which stood roughly 30-feet high and topped off with ant-climb plates. Adjacent to the new wall was the older — and much smaller — anti-vehicle barrier, which stood at about wait high. Much of the new border wall that’s been built has replaced these small vehicular walls or otherwise dilapidated barriers.

Some critics have argued that the Trump administration hasn’t actually built much new wall, but is simply replacing old wall. The acting secretary aggressively pushed back against this narrative.

“One thing I want to emphasize: every inch of the 100 miles that we have constructed is new border wall system. It’s not so-called ‘replacement’ wall as some our critics claim. It is new wall,” Wolf said, arguing that you wouldn’t call the completion of a five-bedroom house in place of a rundown shack a “replacement” house — you’d call it a “new” house.

When asked what they need to make their jobs easier, Border Patrol officials everywhere tell the DHS chief that they need a border wall, he explained.

The location of Yuma for the commemorative event held heavy symbolic value. The mayor of the border town had declared a state of emergency in April of last year as local services were unable to cope with the sheer volume of illegal aliens arriving on a daily a a basis. However, the mayor withdrew the state of emergency in December, and directly credited the Trump administration with implementing directives that led to the stabilization of the border crisis.

Illegal crossings have plummeted all across the southern border in recent months. Customs and Border Protection (CBP) just reported that the month of December witnessed a total of 40,620 enforcement actions — the seventh straight month of declines in apprehensions. These numbers are a far cry from when the border crisis reached its peak in May, where CBP officials saw more than 144,000 enforcement actions.

The Trump admonition was given a major win late Wednesday when the Fifth Circuit Court of Appeals overturned a lower court’s ruling, allowing the White House to use military funds to pay for border wall construction. The administration ultimately wants to see over 400 miles of new wall built by the end of 2020, but court battles, opposition from Democratic lawmakers, and government red tape have slowed these efforts.

Wolf, for his part, hammered his position that physical barriers are an essential part of securing the U.S.-Mexico border.

“I said it before and I’ll say it again: walls work. The facts simply do not lie,” he said.

· TrackBack URI
Previous Post
« Rotting feral pig carcasses teach scientists what happens when tons of animals die all at once, as in Australia’s bushfires
Next Post
Going for Gold for the Rosies »
Open Comments
Albizia Theme designed by itx