Going for Gold for the Rosies 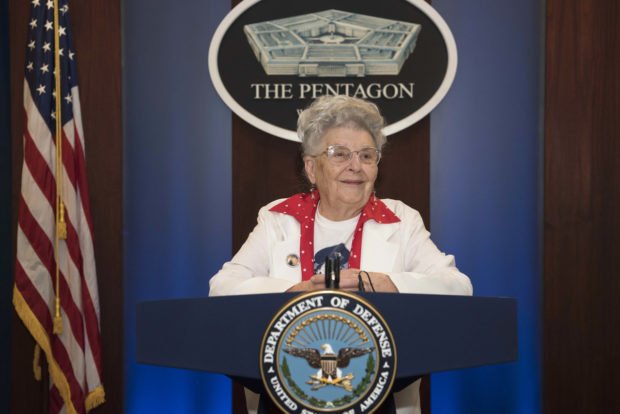 Since March, Mae Krier has traveled a lot. She’s been to the Pentagon four times, to the Capitol three times, all over the United States, and even to Normandy, France, for the 75th anniversary of D-Day.

During World War II, Krier worked at an aircraft factory in Seattle building B-17 Flying Fortress and B-29 Superfortress aircraft. She wasn’t the only one. One estimate puts the number of women working in the defense industry during WWII at more than 4 million. Those women today are collectively known as “Rosies,” after the fictional “Rosie the Riveter” character that came to represent them.

During the war, while a great majority of the men were off fighting, the women who stayed behind were put to work building the war machines their brothers, fathers and uncles would use to defeat the Germans and the Japanese.

Now, Krier said, she hopes America will recognize those efforts.

“What our goal is, is to get the gold medal. … That’s what we want to get for the Rosie the Riveters, the Congressional Gold Medal — the highest civilian award,” she said. “We’re running out of time. We’re living history, what few of us are left. In a year or two, a few years, we’re just going to be a page in a history book … it’s just the fact we want to be recognized for what we did … we did so much. We really worked hard.”

Following the bombing of Pearl Harbor on Dec. 7, 1941, it was clear that a lot of the young men in the United States would be going off to war.

Krier said that growing up on a farm near Dawson, North Dakota, “Times were hard for us and for everyone else.” She noted that it was the time of the Dust Bowl and the Great Depression in the 1930s.

Krier said she and her sister had been at the movies when the Japanese bombed Pearl Harbor. When she returned home, she said, she found her parents by the radio wearing grave expressions on their faces.

It wasn’t too long after the nation would be at war.

While the men went off to fight, there were opportunities for women to help the war effort, she said. The vacuum in the workforce created by so many men leaving for the military meant women would be needed to fill roles that would have previously been filled by men — especially in the defense industry.

“As the boys left, the girls didn’t want to hang around either,” she said. “My sister and I and my girlfriend went to Seattle to work for Boeing.” Krier was just 17 at the time.

She said she thought of the effort as a lark — they’d work for the summer. “We thought it’d be a lot of fun. But the way it turned out, we loved it and we stayed through the war,” Krier said.

At the aircraft factory, she crawled around inside the wings of military aircraft to rivet them together. Krier said she believed that in the plant where she worked, she and the other women built 6,000 B-17 aircraft, though not nearly as many of the B-29s.

“You had to weave between the ribs in the wing,” she said. “Now you’re a bucker in there and you can’t hear what the riveter is on the outside is doing. You sort of have a rhythm. You knock once for ‘hit it again,’ or twice if you want to take it out. You just sort of had a method of our own.”

Krier said she remembers the work being noisy, but fun.

“I look back on it now, when I see a complete B-17 and I just stare at it and think, how did I ever get in there?” she said.

What Krier said she remembers most is that she and other young women proved they were capable of filling roles no one thought they could.

“Up until 1941, it was a man’s world,” she said. “They didn’t realize how capable American women were. We’d never had a chance to prove it. Hitler had said that he wouldn’t have any trouble defeating us because he said American women couldn’t produce. He said we spent too much time on cosmetics and silk stockings and frivolous things.”

“I think we showed Hitler what American women were made of,” Krier said.

(David Vergun contributed to this story.)